Coming from developing iOS applications, the concept that struck me most interesting in Android app development was the way it handled inter-app communications. For the uninitiated, here is a simple way to understand how Android apps work:

The last point makes for very interesting scenarios. This means that app developers can relegate certain responsibilities to other apps the user may have installed. This is also what allows users to switch out the default apps with others. Prefer the new Firefox browser to the default Android one? Well, check off the box that always resolves the browser intent (or specifically the ACTION_VIEW intent) and now you’ll never see the native browser again. While the core Android intents are decently documented, there are even efforts on like OpenIntents.org that try to provide a central location for information on intents offered by third party applications.

When I first saw the Apple Reminders app introduced at the iOS5 keynote, it made no sense to me. Why build a mediocre reminders app when the iOS AppStore is full of really well done todo apps? It wasn’t until I saw Siri at the 4S launch keynote did that click: Reminders is the perfect use case for voice recognition and they needed an app to respond to the Siri “add reminder” trigger. Since then, I have seen a lot of developers get hopeful about when Apple will allow third party apps to be Siri-enabled, but I have a hard time figuring out how exactly that would work. In Android I imagine a central app that dispatches custom Intents like a system wide “Reminder” intent or other custom events that multiple apps can wait on, but I dont think any such concept exists in iOS at least today (hmm, the more I think, it probably could work using something like UIApplicationDelegate’s openURL method and a custom URL Scheme)

The video below by the folks at Remember the Milk showed how to add events to their app via Siri, but if the instructions are anything to go by, its a pretty smart hack but a hack nonetheless. Also I am not sure in this case if your tasks are being pushed to both RTM and Apple Reminders and if they are, I doubt the “done” action is synchronized as well.

Compare that with the second video here done by me using Vlingo, an off the shelf Android personal assistant app (very similar to Siri and surprisingly decent). The video below triggers the “Share” intent at which point I can pick any app from my list of installed apps that respond to that intent. Note that I could have also checked the checkbox there to always go to Remember The Milk (actually my preferred todo app right now is Astrid) but its pretty cool to see that not only did the task successfully get added but so did the day (“Tomorrow”) which is a separate form element in the “Add Task” Activity.

This kind of inter-app play makes for some very interesting possibilities. Its unfortunate that Apple seems to be going the exact opposite direction with apps on their platform. Apps on iOS are already pretty isolated from one another but now those rules are also going to be set on desktop software: a place where it makes even less sense.

On the flip side there are also projects that want to extend the concept of intents to the entire web. If you haven’t seen it yet, check out WebIntents.org. I am pretty excited about this, hopefully this makes it. It looks like both Chrome and Firefox at least are looking to support that kind of mechanism for inter app communication.

Update/epilogue:
I first got really interested in inter app communications when I was playing around with Macromedia Central back in the day. Central was Macromedia’s first try at Flash based desktop apps and never really made out of the developer preview, but it had some great ideas on inter-app communication.

Here is a snippet from their whitepaper on Central: 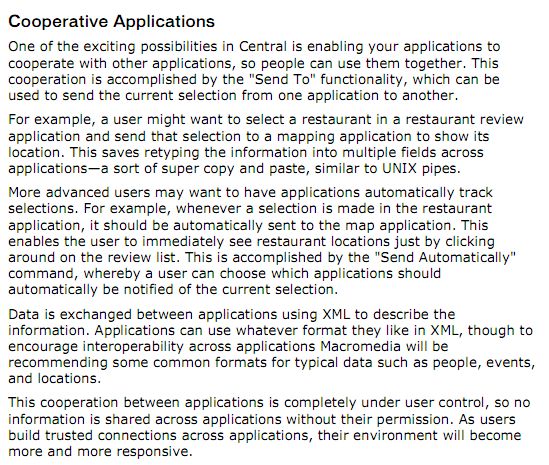 Hey Adobe, can we get this back in a future version of AIR?